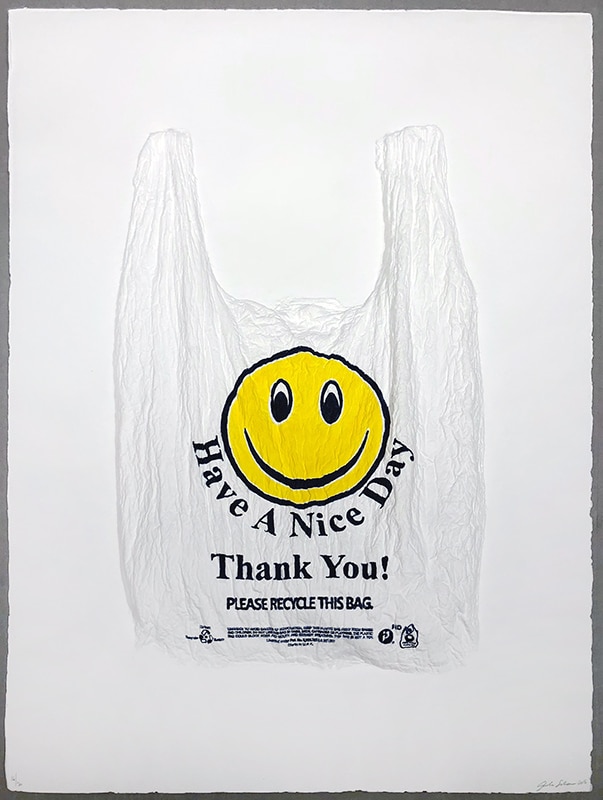 Have A Nice Day, Thank You! Plastic Bag 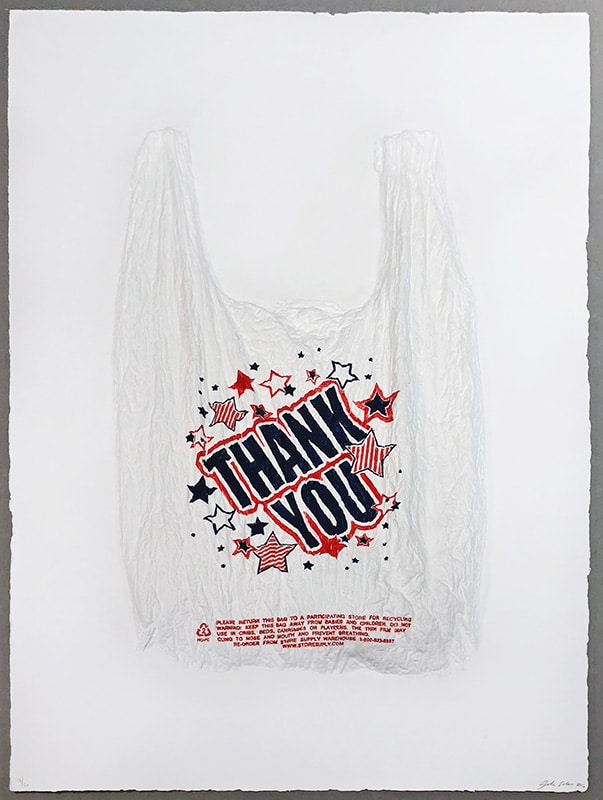 Analia Saban (born 1980) in Buenos Aires, Argentina, is adept at blurring the differences between artforms by deconstructing the techniques she uses in creating her work.  Ms. Saban’s artistic creations are always informed by her curiosity—she establishes her own category of mixed media by getting to the root of how art is created. Her approach to her work is both scientific and imbued with an awareness of the social impact that art can provide. Ms. Saban’s work can frequently be interpreted as a dismantling of art and objects in the quest to convey the metaphysical properties of the subject matter. Her exploration of her (and our) relationship with common objects serves as a powerful commentary on both the artistic process and the impact art can have on our worldly awareness.

Analia Saban was born in 1980 in Buenos Aires, Argentina, where her childhood was informed by the bombing of the Israeli embassy near her school in 1992. The school sustained damage, but when it reopened, it included a video lab donated by the Japanese Embassy. Saban became the only “lab apprentice” and began her education in editing and composition.  Ms. Saban commented about the experience: “It marked me for sure,” she said. “It was a real explosion, with the ground shaking and windows shattering and then chunks of the classroom ceiling falling. I didn’t get hurt but a lot of my friends had blood on them. And I do think a lot of my work has to do with destruction but also fixing things, or trying to weave things — or keep things — together.” (New York Times, June 30, 2017).

Ms. Saban went on to study fine arts—primarily video art—at Loyola University in New Orleans (BFA, 2001). In 2002 she moved on to UCLA for graduate work. She received her MFA in the “New Genres” program in 2005, training with Paul McCarthy and John Baldessari—who also would become her mentor.

Nearing completion of her MFA, Ms. Saban realized that she felt somewhat confused regarding her creative path because, in 2005, the artworld was very much focused on the work of painters. Her reaction to this situation was the creation of “The Painting Ball (48 Abstract, 42 Landscapes, 23 Still Lifes, 11 Portraits, 2 Religious, 1 Nude)”. The work consisted of over 100 paintings, collected from a variety of sources, that she unraveled and assembled into a giant ball. She showed the piece at her graduating exhibition where the work attracted the attention of two galleries leading to shows in both Los Angeles and Germany. Ms. Saban went on to be the featured artist in gallery shows in Paris, London, Buenos Aires, Berlin, Houston, New York and Shanghai.

Ms. Saban’s obscures the differences between the various artistic media by deconstructing the methods of creating art. Her work is always influenced by her curiosity—from exploration of art forms and their relationship to the very nature of art to humorous investigations of everyday objects and their physical and metaphysical significance. Ms. Saban is known for “dissecting” art and exploring the connections between historical references, traditional concepts and everyday objects. There is frequently a sense of ambiguity regarding the subject matter, yet, she approaches her work scientifically because, beyond the symbolism of the subject matter, she is also interested in the physical qualities of the work—including relationships between the second and third dimensions.

Analia Saban was an Artist in Residency at the Getty Institute in 2015-16. In addition to gallery exhibitions, her work is featured in the permanent collections at LACMA; the Hammer Museum; the Museum of Contemporary Art; Fonds régional d’Art contemporain, d’Auvergne, France; the Hessel Museum of Art at Bard College, NY; National Gallery of Victoria, Melbourne, Australia and the Norton Museum of Art, West Palm Beach, FL.

Flaunt Magazine, LA – “Analia Saban: Let’s Let the Subconscious Speak for Itself Shall We?” by Alison Green

Los Angeles Times – “It’s not what it seems: Unraveling the secrets of Analia Saban’s ‘Threadbare’ ” by Leah Ollman

New York Times – “Studio Visit: An Artist at Home on the Fault Lines” by Jori Finkel